Thank you for attending “Interdependence in Action: Building a New Framework for Solving Global Problems”

Watch above or click one of these channels to replay the event:

The OneShared.World Rise or Fall Together Events Series

Afterwards, participants continued the conversation  in our virtual breakout session.

Founder and Chair of OneShared.World, Senior Fellow of the Atlantic Council 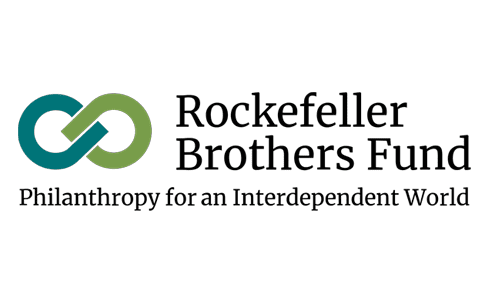 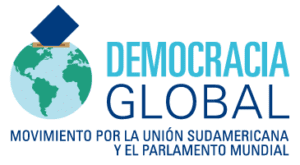 The African Network for Internationalization of Education (ANIE), The Committee on Global Thought of Columbia University, Democracia Global

Joseph Nye on “power with” versus “power over” in meeting global crises, from his presentation at the OneShared.World “RISE OR FALL TOGETHER: The OneShared.World Interdependence Summit 2020,” on September 17, 2020.

Damdin Tsogtbaatar, Member of Parliament, Mongolia, on how the world can be efficient only when we work together to strengthen and not weaken our international institutions, from his presentation at the OneShared.World “RISE OR FALL TOGETHER: The OneShared.World Interdependence Summit 2020,” on September 17, 2020. 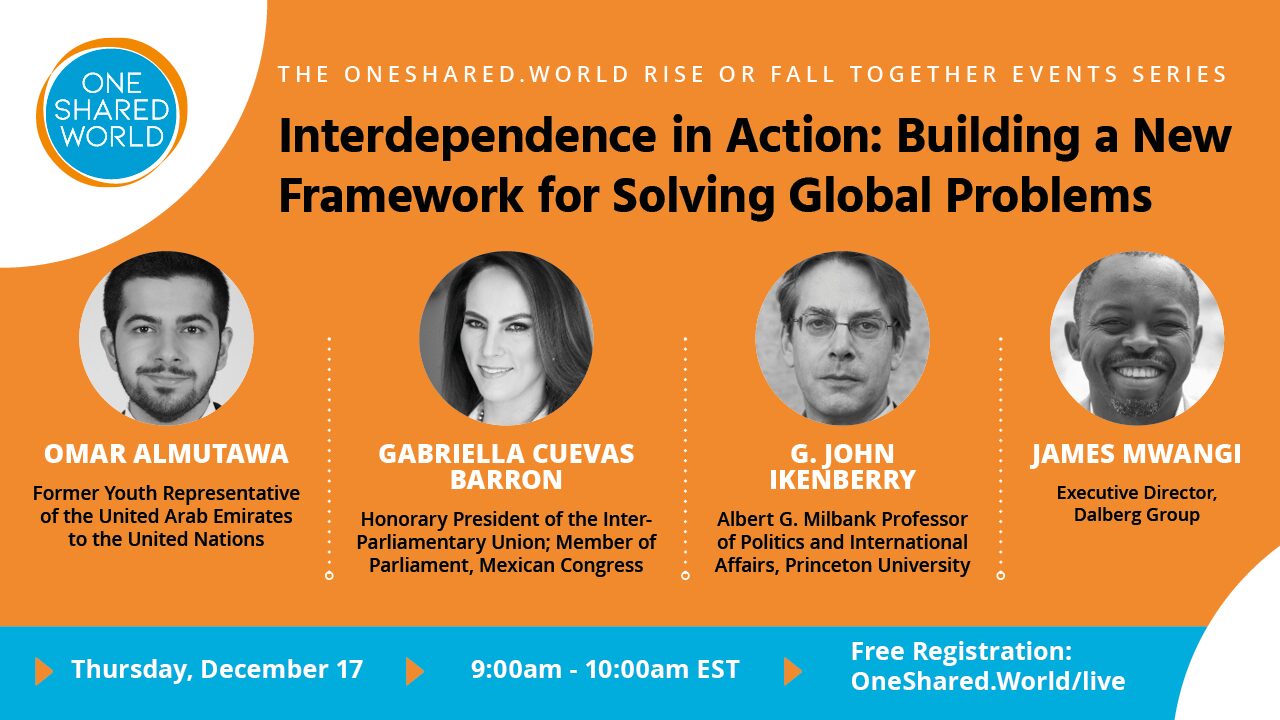 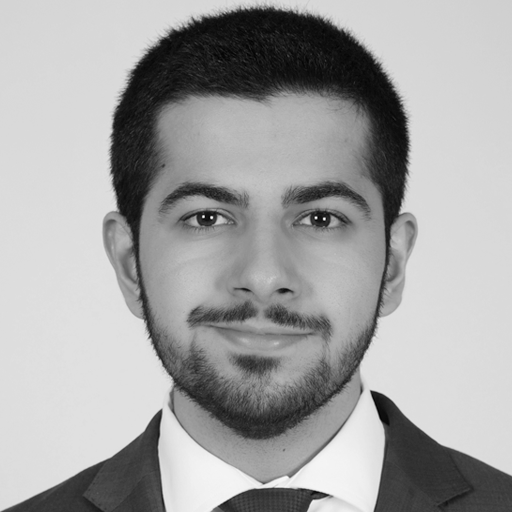 Omar Almutawa is a researcher and civil servant with a background in global affairs and international relations, having earned graduate and undergraduate degrees in these fields from Columbia University and the American University of Sharjah, respectively. Almutawa’s research interests include the impact of megatrends, the future of governance, and public sector transformation. Almutawa is on the board of United Ambassadors, a youth-led organization that builds leadership capabilities, engages youth in global issues, and promotes global citizenship through its accurate simulations of the UN. Almutawa is also a member of the UAE’s Youth Councils, which are official bodies where youth are represented nationally, locally, and across sectors. Previously, Almutawa served as the UAE’s Youth Representative to the UN and the Secretary-General of AUSMUN, the UAE’s leading Model UN conference. 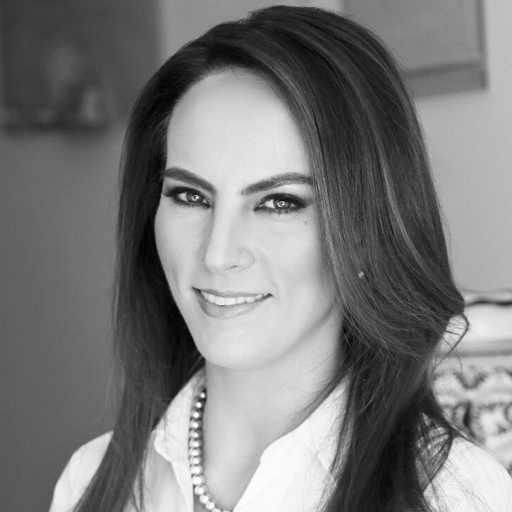 Gabriela Cuevas Barron became the youngest and the second woman to be President of the Inter-Parliamentary Union (IPU). Ms. Cuevas is also a member of the UHC Movement Political Advisory Panel to UHC2030. In addition, she is a Member of the High-Level Steering Group of Every Woman, Every Child, and Co-Chair of The Lancet COVID-19 Commission’s Task Force on Humanitarian Relief, Social Protection, & Vulnerable Groups, and is also a member of the Task Force on Global Health Diplomacy and Cooperation, and the Regional Task Force for Latin America. 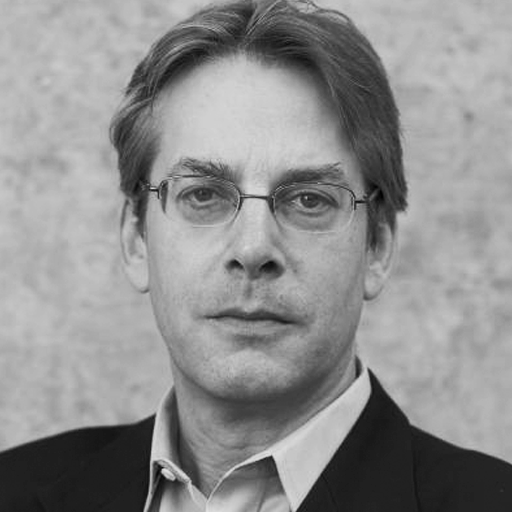 G. John Ikenberry is the Albert G. Milbank Professor of Politics and International Affairs at Princeton University in the Department of Politics and the Princeton School of Public and International Affairs.  He is also Co-Director of Princeton’s Center for International Security Studies. Ikenberry is also a Global Eminence Scholar at Kyung Hee University in Seoul, Korea. In 2018-19, Ikenberry was a Visiting Fellow at All Souls College, Oxford University. In 2013-2014 Ikenberry was the 72nd Eastman Visiting Professor at Balliol College, Oxford. Ikenberry is a Fellow of the American Academy of Arts and Sciences. In a recent survey of international relations scholars, Ikenberry was ranked 10th in scholars who have produced the best work in the field of IR in the past 20 years, and ranked 8th in scholars who have produced the most interesting work in the past 5 years.

Professor Ikenberry is the author of eight books, mostly recently A World Safe for Democracy: Liberal Internationalism and the Crises of Global Order (Yale 2020), and  Liberal Leviathan: The Origins, Crisis, and Transformation of the American System (Princeton, 2011). His book, After Victory: Institutions, Strategic Restraint, and the Rebuilding of Order after Major Wars (Princeton, 2001), won the 2002 Schroeder-Jervis Award presented by the American Political Science Association for the best book in international history and politics. A collection of his essays, entitled Liberal Order and Imperial Ambition: American Power and International Order (Policy) appeared in 2006. Ikenberry is also co-author of Crisis of American Foreign Policy: Wilsonianism in the 21st Century (Princeton 2009), which explores the Wilsonian legacy in contemporary American foreign policy. Ikenberry has also the editor or co-editor of fourteen books, including America Unrivaled: The Future of the Balance of Power (Cornell, 2002), The End of the West? Crisis and Change in Atlantic Order (Cornell 2008) and Unipolarity and International Relations Theory (Cambridge, 2011).  Ikenberry has authored 130 journal articles, essays, and book chapters.

Professor Ikenberry is the co-director of the Princeton Project on National Security, and he is the co-author, along with Anne-Marie Slaughter, of the final report, Forging a World of Liberty Under Law.  Among his many activities, Professor Ikenberry served as a member of the Policy Planning Staff in 1991-92, as a member of an advisory group at the State Department in 2003-04, and as a member of the Council on Foreign Relations Task Force on U.S.-European relations, the so-called Kissinger-Summers commission. He is also a reviewer of books on political and legal affairs for Foreign Affairs. 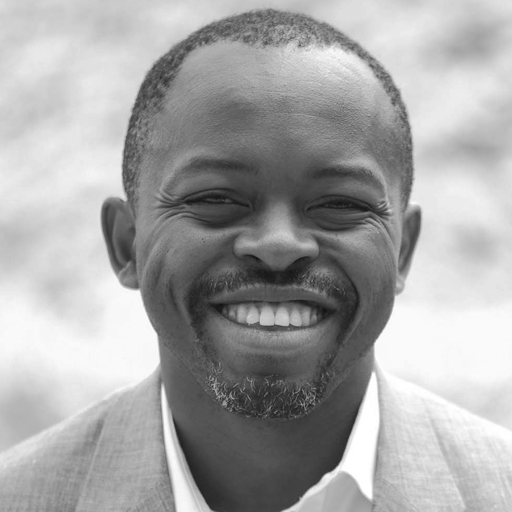 James Irungu Mwangi is the Executive Director of the Dalberg Group, an advisory firm that focuses on inclusive and sustainable growth. James leads integration and innovation across Dalberg’s five core businesses, which together employ over 600 staff in 27 locations across the globe, including 13 countries in Africa.

James founded Dalberg’s presence in Africa in 2007, and previously served as Global Managing Partner of Dalberg Advisors from 2010 to 2014. He currently serves on the boards of Old Mutual, The Skoll Foundation, One Acre Fund and the Global Centre for Pluralism. He holds an honors degree in Economics from Harvard University, was previously with McKinsey & Company, and is an Archbishop Tutu Leadership Fellow (2009), a Young Global Leader of the World Economic Forum (2013), and a member of the Young Presidents’ Organization. 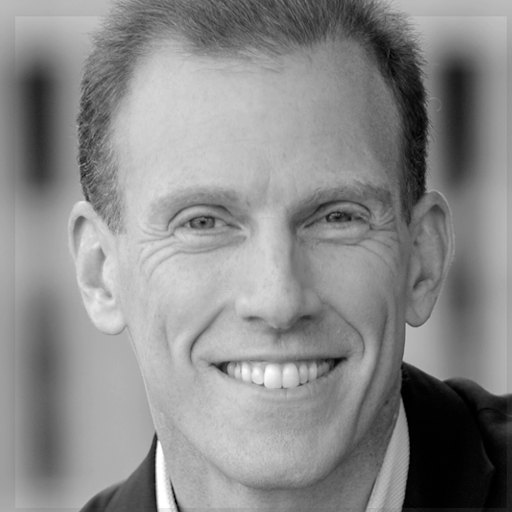 Jamie Metzl is the Founder and Chair of OneShared.World and a leading technology and geopolitical expert. A science fiction novelist, faculty member of Singularity University Exponential Medicine, and Senior Fellow of the Atlantic Council, he was appointed in 2019 to the World Health Organization expert advisory committee on human genome editing. Jamie previously served in the U.S. National Security Council, State Department, and Senate Foreign Relations Committee and with the United Nations in Cambodia. Jamie appears regularly on national and international media discussing global issues and his syndicated columns and other writing are featured in publications around the world. He is the author of a history of the Cambodian genocide, the historical novel The Depths of the Sea, and the genetics sci-fi thrillers Genesis Code and Eternal Sonata, and the recent bestseller, Hacking Darwin: Genetic Engineering and the Future of Humanity. An avid ironman triathlete and ultramarathoner, Jamie holds a Ph.D. from Oxford, a law degree from Harvard Law School, and is a graduate of Brown University.